Diversity in Leadership – Is It Really Something We Can Fix?

Amidst all the talk of further lockdowns and economic recessions, we took some time out for our recent October masterclass to talk about that other BIG corporate topic – Diversity.

We were joined by Azeem Akhtar, Global CTO of Resources, Manufacturing & Logistics at BT Global Services, to talk about his experience growing up in different countries and how he applies this to his day-to-day corporate role at BT. 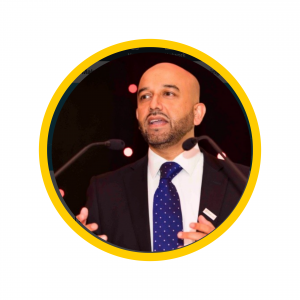 To start off with, a few disclaimers from the man himself!

In his capacity as speaker and advisor at our masterclass, Azeem was keen to stress that he was not speaking on behalf of BT, or on behalf of Active Essex, where he is Chairman, and Sport England, where he also serves on the board.

He was also keen to stress that he certainly doesn’t see himself as a poster boy for Diversity & Inclusion. That said, his background, experience and beliefs do put him in a position to speak knowledgeably and passionately about the topic.

So, let’s delve into his views!

From Essex, to Saudi, and then back to the UK

Born in Essex to Pakistani immigrants, Azeem moved to Saudi Arabia at the age of 10, where he encountered an extremely conservative culture that was to be expected of the country in the 1980’s!

At the age of 13, he then moved back to the UK where he was thrown back into an open culture and a race agenda that was just recovering from the 1981 England riots.

Growing up in the UK, Azeem’s parents were relentless in making sure that he aimed, and achieved, high! Mainly to avoid, as much as possible, the injustices that they had suffered many years before as immigrants in the UK.

Driven by this impetus, as well as an analytical mindset, Azeem excelled in mathematics and went on to complete a Bachelor’s degree at King’s College, London, and Master’s degrees at both LSE and Imperial.

You’d be forgiven for thinking that a man with such an outstanding academic background would do well at work too. And by and large, Azeem admits that has been the case.

However, Azeem found that he had to push himself much harder and outperform others just to be considered at the same level as others not from a minority background.

Then a turning point came… 9/11. The rhetoric that Azeem started to hear from politicians and the media, as well as the blatant racism he started to face in the UK in his personal and professional life, made him take stock. He made the decision to move to Dubai and pursue an opportunity with BT there instead.

Nevertheless, the move to Dubai cemented in Azeem’s mind that Britain was, and still can be, the most multicultural place in the world, something it needs to hold on to at the moment rather than take the path of ‘little England’ that certain politicians seem hell-bent on pursuing in recent years. A path towards a monolithic, ‘one-race, one-religion’ society that Azeem is keen to underline does not prosper.

The problem with a lack of diversity

Azeem points to a meeting he remembers having a few years back in Saudi where all the people in the room were men, they were all wearing exactly the same clothes, all well educated from the same Western universities and all supported either Liverpool or Manchester United!

The result of that meeting was to be expected – a strategy that didn’t take into account the different demographics across the country and that didn’t allow for consumer preferences amongst women or lower income homes, for example. It was distinctly lacking in any sort of creativity or originality and, for Azeem, highlighted the fact that discrimination drives a suboptimal economic model that delivers below par results.

So how do we fix the diversity problem?

Azeem’s approach is simple. First and foremost, he says we need to focus on the largest swathes of society, namely:

We need to embrace multiculturalism, empower different ethnicities and, most of all, engender a sense of fairness and justice.

When it comes to a corporate context and, in particular, the corporate hiring process, then it’s about a two-stage process.

In terms of what that actually looks like, Azeem shared some great advice that all corporate teams can easily start doing straight away.

For more advice on how to fix diversity in the workplace and how D&I can actually be used to drive growth, check out this guide.

What does a diverse business look like? And is positive discrimination the way to go?

A tricky issue all in all that each business needs to weigh up individually.

Personally, Azeem doesn’t believe that positive discrimination is the right path or that it leads to sustainable results. Equally, it’s not about mimicking the population ratios – just because 2/7th’s of the population are muslim, doesn’t mean the same % needs to be reflected in all corporate teams. 7/7th’s of your team need to be there based on merit, having arrived there based on a fair, transparent and open selection process.

Indeed, Azeem is keen to stress that addressing discrimination should not be at the expense of being a meritocracy. Giving someone a job based on anything other than capability perpetuates the core issue and actually adds to the problem, creating further resentment in the medium and long term.

What is important though is accountability, and a clear mandate from the people at the very top of any organisation. Not only that, but having senior leadership take action is of crucial importance – which means carrying out things like spot checks on hiring processes, holding others accountable as to why certain people weren’t interviewed… the list goes on.

For Azeem, it’s clear that we’re at another major turning point in history when it comes to diversity and inclusion. The events of 2020 have put a focus, on the one hand, on supporting others and ensuring we’re more open and helpful. However, on the other hand, they also run the risk of marginalising large groups of society even further. We all need to ask ourselves – what sort of society do we want to live in going forward? And what can we do to promote that every day in every small action we take.

Stay in the know with our exclusive scaleup resources and reports

By clicking “Keep me updated” you are agreeing to receive Invigorate’s insight emails.