We’ve already broken down VC expectations for founders and CEOs in part 1 of this article. So for part 2 we are tackling the rest!

If you plan on achieving scale (and you are on the wrong website if you don’t) you’ll need a kick-ass team to help you build, execute and lead. And the VCs definitely know this.

So what are they looking for?

Steve Jobs, Mark Zuckerberg, Jack Dorsey: the popular image of the successful startup founder is of a solitary genius, and quite often someone who doesn’t play well with others. But aside from the frequent mythologising of a few famous founders (often based on the way they lead now, as owners of well-established and powerful companies, rather than in their early days) the current trend in VC is actually towards co-founding teams.

Lots of VC firms advertise or otherwise show a strong preference for co-founding teams. Some even use investment criteria that automatically disqualify solo founders.

Y-combinator discusses this trend on their website, noting that while they don’t discriminate against solo ventures, their ‘advice remains that one-person startups are tough and you’re more likely to succeed with a co-founder.’

The first is pastoral. Running a scaleup can be stressful and isolating and founders are held responsible to employees, customers, and investors. It’s often a hard burden and one non-founders can’t entirely understand, limiting real support mostly to founder’s networks. This means that most solo founders have no-one they can completely confide in who can both understand the burden they are carrying and don’t represent a conflict of interest or potential business risk.

A co-founder, however, is a second person to carry the burden. They are equal (at least approximately) within the business and facing the exact same challenges. Co-founders can also challenge each other and fill skill gaps – resulting in a more rounded founding team.

While every founder or co-founder needs to get at least a bit familiar with every aspect of their business, it’s unlikely you’ll be an expert in everything. Most scaleups with founding teams will have one founder that specialises in the technical side, and another on the business side.

Even businesses with sole founders tend to have a second powerful member of staff – a CTO or COO – who can complement the founder’s strengths. However, by making that person (or people) co-founders rather than employees, the business can often become more rounded and less likely to sacrifice product to sales or vice versa.

So it’s no surprise that many VCs and accelerators often prefer co-founding teams. Sometimes they will even help applicants or new businesses to find co-founders if they have applied on their own.

However, there are some risks associated with co-founder relationships. Conflict between co-founders can cause significant business problems, and relationships can go south very quickly under the stress of scaling a business.

But given the similarly high risk of founder burnout this is generally seen as an acceptable risk. 5% of failed founders actually blame burnout for the failure of the business and an even larger percentage of founders experience this problem.

Forward Partners sums it up nicely: ‘The rationale for finding a co-founder is simple – it is good practice to find a genuine peer that can challenge and support in equal measure. It is also something that investors like to see.’

The rest of the team

“It’s the team that means everything” – Sam Bernards, partner at Peak Ventures

Unless you have somehow stumbled onto the world’s most perfectly scalable business model, a business that can be taken all the way to IPO with nobody but the founder, ultimately the success of the business is going to come down to the people you hire.

A slide introducing key team members is a well-established part of any pitch deck. But unless you understand why it’s so important – and what investors actually want to know from it – it has limited use.

A great way of seeing how VCs actually analyse teams is to have a look at the publicly available investment memos. For example, this section from Bessemer Venture Partners’ investment memo for Twitch’s Series B: 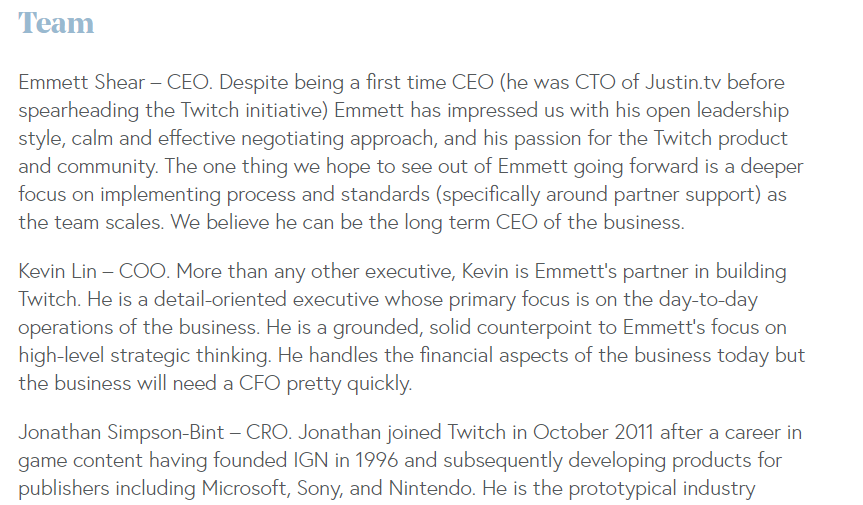 This isn’t just a run-down of everyone’s names and career highlights – the written analysis of the COO and CRO are given as much detail as the CEO.

Everything from management styles to strengths and weaknesses are considered, and VCs might make recommendations either for further hires or people who would need to be replaced.

When it comes to the actual specifics of what each team member might be judged on, GoingVC has a great guide for VCs, breaking down need-to-have and nice-to-have skills for the major c-suite roles.

But the team is in many ways an interesting grey area for investors.

On the one hand, these are the people who will actually be doing a lot of the work building the company, and it is vitally important that they can do their jobs well.

But on the other hand, it is very likely that the business will lose many of these team members at some point or another. VCs struggle enough with keeping founders from prematurely stepping down. Key hires have less to gain from the business’s success, and less to stop them moving on – for their careers, for personal reasons, or just because they fell out with their co-workers.

This means that when VCs are analysing your key hires, they are essentially doing two things. They are looking at these employees on their own merits to see how much of an advantage they bring the business, but they are also looking at them as an example of the founder’s ability to hire the right talent. Great team members are not just great in and of themselves, they demonstrate the leadership qualities of the founder, and whether they are capable of finding more great team members in the future, whether to replace lost staff or to meet the changing needs of the business as it expands and succeeds.

According to failed startup analysis site Autopsy, 20% of businesses reckon they failed because they didn’t have the right team, so you can see why investors need to know about yours!

Why Startups Fail? A Data Analysis by Autopsy, Autopsy

The board is an integral part of a business’s leadership, determining strategy and providing governance. However, as it’s not a concern yet at Seed where a board might not be necessary and where so much of the literature about VCs and leadership are founder focused, it often goes undiscussed.

But VCs actually have many reasons to be interested in the board of any company they might invest in.

First off, as the board is responsible for governance – and for protecting the interests of shareholders – then the VCs as future shareholders themselves will obviously want to be assured that the board is effective and trustworthy.

To this end, you need to be careful that there are no unpleasant surprises in the past of any of your board members.

Major shareholders might also expect to hold a board seat of their own, and will likely have to work closely with your board regardless. This means that inter-VC politics can often come into play. For example, Eghosa Omoigui, partner at Intel Capital, notes that when they attempted to join LinkedIn’s Series D they faced significant opposition from incumbent investor and board member Sequoia ‘because we had antagonised them in 1999 and they hadn’t forgotten.’ The deal eventually failed, despite the enthusiasm of both Intel Capital and LinkedIn’s founders.

Inter-VC politics isn’t much spoken about, as it’s not in their interest to air dirty laundry or personal problems, but the mixture of competition and cooperation needed for the industry to survive means that there is a fair amount of byplay that can be invisible to businesses.

It’s a problem most businesses, unfortunately, can’t do very much about, but it’s worth being aware of. Of course, the opposite also happens, and some VCs will have long histories of working well together. But when you are coming to choose between investors, or just deciding whether or not to accept an investment, it can often be worth considering their reputation and whether their involvement might be a burden later.

As the board also sets the business’s high-level strategy, all of the board members will also be assessed for this. NEDs should possess plenty of experience as industry specialists and have served on boards of their own. You also want a good balance of different specialisms and perspectives to give the business its best chance of success. You can check out an article we wrote here if you’d like more advice on building and maintaining a great board.

Like with team members, boards also represent a sample of the kind of talent you can attract in the future, as the board will inevitably need refreshing as the business grows and its advisory needs and investor makeup change.

So what does this all mean?

As more data becomes available, we are starting to see more VCs relinquish older expectations and welcome a more diverse group of founders and founding teams. However, in a system powered by personal networking, there is still a lot of work to do before minority, non-traditional route careers, or even people living outside of major tech centres can expect to have equal chances of getting in front of the right VCs.

In the meantime, any founder can improve their chances of getting funded by making sure they have the right leadership – and leadership training – in place to make sure your business is a no-brainer.

If you need help improving your own leadership skills, advisors, mentors and executive coaches are all great resources for developing as a leader and avoiding common pitfalls. It’s also worth bringing on advisors or mentors for struggling key team members, or to help you get your business structure right so that you are setting your team up for leadership success. You can get help with all of this with Invigorate, or check out our articles on finding help yourself.

Or if you’d rather do some more reading on leadership, check out some of the resources we have collated below so you can see for yourself exactly what VCs think makes a great leader.

Founders, here’s how top VCs are doing due diligence on you | Julius Bachmann, Sifted

Discovering the next unicorn founder with data, not gut instinct | Alexander Davis, Pitchbook

Why Startups Fail? A Data Analysis by Autopsy | Autopsy

How Do You Measure Leadership? | Ali Rowghani, Y-Combinator

You Can’t Get There On Your Own | Bernard Liautaud, Balderton

Stay in the know with our exclusive scaleup resources and reports

By clicking “Keep me updated” you are agreeing to receive Invigorate’s insight emails.